Still marooned in the UK, we headed to my hometown of North Berwick, Scotland; a birthplace shared by The TPG's proprietor.

Our first objective, the Law, a well known landmark, seen for many miles away as standing out like a carbuncle on what is mainly the very flat county of East Lothian. The word law is a lowland Scottish term for conical hill and standing at 613 feet above North Berwick the Law provides tremendous views across the surrounding land and sea. Looking northwards across the Firth of Forth to Fife and the Ochil Hills. The "Paps of Fife" are clearly visible with a glimpse of the highlands behind. Turning to the east, the islands of the Bass Rock, May Island and, as you pan westwards, you take in Craigleith, the Lamb and Fidra on the way to Edinburgh and the Forth crossings, old and new. To the south are fine views of East Lothian, "The garden of Scotland" to Garleton Hill and Traprain Law against a backdrop of the Lammermuir Hills. Geologically, the Law is a volcanic 'plug' of hard, hard phonolitic trachyte rock of Carboniferous age. It survived the scraping glaciers of the ice age, leaving it with its crag and tail structure and prominent tail extending eastwards. Arthur's Seat in Edinburgh was formed in the same way and in the same ice age.

The south slope bears remnants of an Iron Age hill fort, and on the summit the ruins of later military buildings once used by lookouts in both the Napoleonic Wars and World War II.

The famous whale's jawbone collapsed in June 2005 after rotting away, and was removed by helicopter, much to the surprise of North Berwick residents. A jawbone has stood there since 1709, the last one having been there since 1933. On 26 June 2008, a fibreglass replica, funded by "an anonymous friend of North Berwick", was airlifted into place to give North Berwick Law back its famous landmark. For our walk we planned to start from my brother's house in the upper town to the Law, firstly climb to the summit then descend back to the lower path which circumnavigates the hill then returning to our start point. However, for visitors to North Berwick who want to take in more of the town and its spectacular scenery it would be better to start in the town near the harbour following the same route as illustrated but then on descent to extend the route down to the Glen Golf Club then turning westwards along the sea front back to the harbour and High Street. 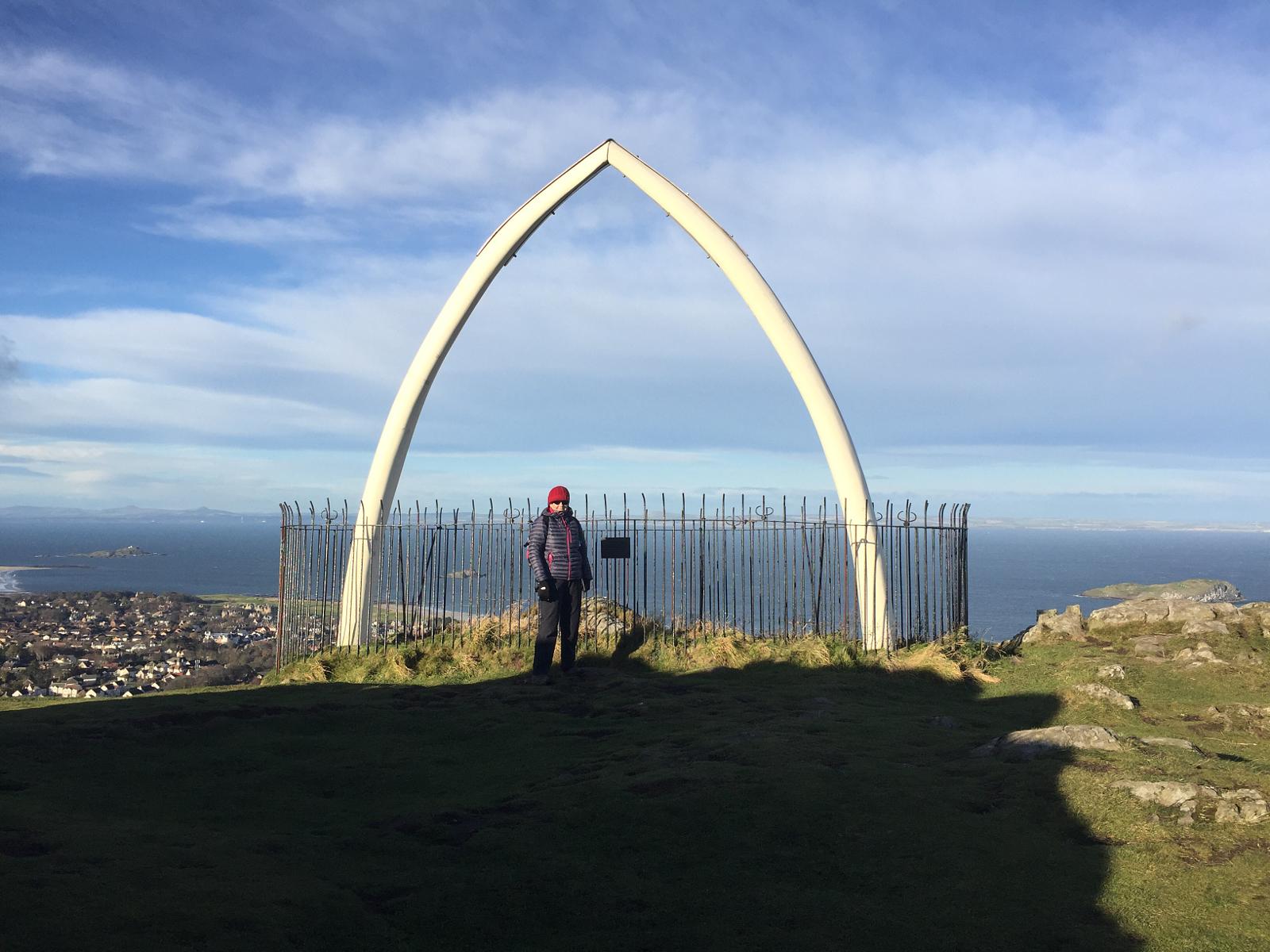 On our day, though it was sunny and clear, there was a stiff, cold north-westerly wind, which made climbing and keeping one's balance difficult. However, we persevered and with many stops to catch our breath we reached the summit and the fine views over the Firth of Forth and its islands. Tantallon Castle could be seen clearly to the east near the estuary of the River Tyne and Dunbar. Not to be confused with the Newcastle river, this Tyne flows gently through the southern part of East Lothian to the North Sea. The estuary was a favourite haunt as a child where we challenged the incoming tides to fish for flounders or "sauties" also known as flukes or dabs. At the flow of the tide, an enormous number of these fish would migrate up the main channel and could be easily caught with a rod, hook and lugworm. My father loved them simply rolled whole in seasoned flour and fried in a hot pan with butter. Just beyond the estuary is the old fishing town of Dunbar where my mother was born. On a clear day you can see all the way to Saint Abb's Head ignoring the nuclear power station at Cockburnspath.

Having partaken of hot Bovril and a sandwich in the shelter of an old ruined building and taken the obligatory photographs, we descended around the southern side until we met the path on which we made our original ascent. On reaching the base we then turned in an easterly direction through an old disused quarry, which is very popular with climbers, on a route round the southern side of the bottom of the slope. As you arrive at the eastern end of the base a number of tall beech trees can be seen on the shoulder of the hill. The original, local Laird, Sir Hew Dalrymple planted these trees to commemorate the beginning of the Act of Union between Scotland and England in 1707. It is argued that this is the most important set of trees in Scotland but only 6 remain. More information can be found by using the link below.

Descending from here, on what became an extremely wet and muddy trail and crossing a marsh we eventually reached the solid tarmac of Glenburn Road and repaired back to my brother's, passing the house I was born in on the way. This left us time to return and walk round the town the following day.

North Berwick, often called the Biarritz of the North, is a seaside town situated on the south shore of the Firth of Forth about 25 miles north-east of Edinburgh. The town became fashionable in the 19th century due to its two sandy bays and the excellent golf courses in the area. Wealthy and famous people came to the town seeking lessons from prominent golf professionals including Ben Sayers. These included Edward VII and the son of the Czar of Russia. It was Sayers who, in partnership with James Braid, a prolific course designer, laid out the extension to the existing Rhodes 9 holes to 18 holes we see today as the east course "The Glen". This was completed in 1906. The west links is the home to North Berwick Golf Club, which, as the 13th oldest golf club in the world, was founded in 1832. The west links is a true links course, a championship course that has hosted many events including the final qualifying for The Open Championship and men's and ladies amateur championships.

The name North Berwick means North "barley farmstead" the North being applied to distinguish it from Berwick-upon-Tweed. It was first recorded as "Northberwyk" in 1250. To the south of the town there is evidence of at least eighteen hut circles, rich middens and a field system dating from 2,000 years ago. North Berwick harbour was built in the twelfth century to meet the demands made of the ferry trade between the town and Earlsferry in Fife. Evidence has been found of this ferry system existing from the eighth century serving pilgrims on their way to the shrine of St Andrew. There is much history around the town but one of the most notable was the famous witch trials. In the sixteenth century at least seventy people were implicated in these witch trials and the events inspired works such as Burns' Tam o' Shanter and "The Thirteenth Member" by Mollie Hunter. One of the most famous trials was of Agnes Sampson who was accused of making a potion to make the storms rough for King James VI of Scotland who was sailing home from Denmark with his new wife, Anne of Denmark. The trial took place in the presence of King James himself and Sampson was tortured to confess and then burned at the stake. Local lore, place names, and the jawbone atop the Law suggest that the port was involved in the whaling industry though little written evidence exists to support this.

The railway arrived in North Berwick in 1850 but the town was more or less bypassed by the industrial revolution. The late nineteenth century saw the development of holiday and golfing facilities. The famous Ben Sayers golf club factory was in North Berwick and continued production until it was latterly moved to the midlands. Today's attractions are still golf and beaches but also the many available boat trips to the nearby islands such as the Bass Rock, one of the largest Gannet colonies in the world. This has now been supplemented by the arrival of the Scottish Seabird Centre where visitors can not only learn about the many seabird species but can watch the birds in their environment through webcams installed on the various local islands. These can also be viewed on the web, (see below). Robert Louis Stevenson, the author of Treasure Island spent many holidays in the town as a child and a young man. The island of Fidra in the Forth to the west is said to be the original inspiration for Treasure Island, and Catriona, the sequel to Kidnapped is set locally. His essay, The Lantern Bearers, relates to his boyhood memories of the town. It was published in 1895 in a book of essays "Across the Plains" which I am fortunate to have a copy of. Well worth the read if you are interested in North Berwick.

My wife and I had an excellent time strolling round my old haunts though the old shops I had known as a child have now more or less been replaced by boutique style outlets. However we did enjoy visiting the harbour and also seeing the coastguard station, now private dwellings, where my grandfather served, and where I spent many a summer holiday, overlooking the beach and the east bay.

We then repaired to our Edinburgh hotel before our long drive back to the south east of England and only slightly warmer weather. We decided there and then that we would return in the Spring or early Summer when the climate is a bit warmer, only a bit!